Places to see in Paris

Like the French say "Paris wasn't made in a day" and the city has a very rich history, which goes back to 2000 years. The city center boasts indeed many oustanding historic landmarks or monuments and there is of course a lot more to be seen than just the Eiffel Tower, Le Louvre museum and Sacre Coeur at the top of Montmartre hill. Here is our selection of the best places to see, the best attractions not to be missed when coming to Paris.

Here is our list of the places to see in Paris:

The Eiffel Tower was built by Gustave Eiffel as a temporary monument for the World's Fair of 1889. Just a few days after it was completed it became the most famous landmark of the city receiving the visit of 2 millions people the first year. Today after more than 120 years it remains tourits' favorite attraction and welcomes about 6 millions visitors a year... Eiffel Tower

The Champs Elysees Avenue is 1.2 miles long and stretches from the Arch of Triumph to the Place de la Concorde where stands the Egyptian obelisk. The Avenue is lined up with many shops, restaurants, cafes, theatres and even a cabaret (The famous Lido)... An unmissable walk when coming to Paris for the first time. Read more about the Champs Elysees Avenue

The Sacre Coeur and Montmartre hill

Every year Montmartre hill topped with Sacred Heart Basilica welcomes about six million visitors who like to stroll along the narrow cobblestone streets of old Paris indulging in the historical atmosphere. The top of the hill offers one of the best panoramic view over Paris however the place is usually crowded with tourists.

Le Marais is a trendy district in Paris now celebrated for its nightlife (Gay district). In the eleventh century, Order of the Temple cleared the swamps (Marais in French) and began to build on this area. Then after the XIVth century the aristocracy built large residences and the famous Place Royale (Places des Vosges). The departure of the royal court to Versailles led to a decline in the district. In 1969, André Malraux made the Marais the first protected sector, with the area being home to many museums, art galleries and historic sites. A few steps away another great place to see is the Saint Paul village with its narrow cobbled streets lined up with antique shops.

The building's original purpose was a hospital and a retirement home for war veterans. It was decided by Louis XIV in 1670 and completed in 1708. Les Invalides is also the burial site of Napoleon Bonaparte. The Invalides today hosts the Army museum. A long esplanade facing the building directly leads to Seine riverfront.

The Louvre Museum is one of the most famous in the world... 6000 paintings are offered to public's eyes. The museum presents the main part of its treasures to visitors, in the new Richelieu wing: The Venus of Milo, the Winged Victory of Samothrace not to forget the Mona Lisa of Leonard da Vinci. Read more: Louvre Museum

From 1900 to 1939, the place was ... a train station! It was the head of the southwestern French railroad network. In the late 80s the train station, which had become too short for modern trains was made a museum mainly devoted to Impressionism paintings and scuptures. A nice place to see along the left bank of the Seine River. Read more: Orsay Museum

The Palace of Versailles

The Chateau de Versailles is one of the largest castles in the world. The palace counts not less than 2300 rooms! Versailles and its gardens remains one of the tourists favorite visit when coming to Paris: In 2010 about six million visitors have discovered this architectural and cultural masterpiece. Definitely a must see place. Read more: Palace of Versailles

Many tourists planning a trip to Paris wonder about what they should see or do during their stay in the city of lights... Of course a visit of the Eiffel Tower is a must but there are many other (better) ways to really feel the unique atmosphere of Paris. One of them is simply to stroll the streets as city center is fairly small in comparison to other capitals. Please read our guide to unmissable things to do when visiting Paris: Things to do 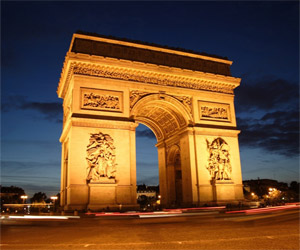