Disneyland Paris is located 30km in the East of Paris. The recreation resort hosts two theme Parks: Disneyland Park and Walt Disney Studios Park. Both of them totalize about 16 Millions visitors a year making Disneyland Paris the most visited tourist site in Europe. Please find here below informations about opening hours, tickets price, road direction and means of transport from or to Paris city center, Roissy, Orly or Beauvais airport.

Transfer to or from Disneyland Paris

Transportation from or to Disneyland Paris

Taxis use fare meters. The cost for a transfer from or to Paris is usually about 55 to 80 euros and the duration is about 45 minutes. However expect total fare and travel times to be much higher during rush-hour times (7am-9am and 4pm-8pm).
Read more: Taxis & Disneyland taxi fare

There is no direct bus line from or to Paris. However a direct bus service is operated between Roissy, Orly or Beauvais airport and Disneyland Paris.
Read more: Bus - Coach service

The Park hosts a TGV (High speed train) railway station. Train are arriving from and leaving to many French cities (Except Paris). Connection to Paris is made by RER A - a suburban train. Travel time is about 50 minutes and cost is 6.70 euros one way.
Read more: RER - Train service

Looking for a good bargain? Check out: Disneyland Paris Tickets

Map: Where is Disneyland Paris located? 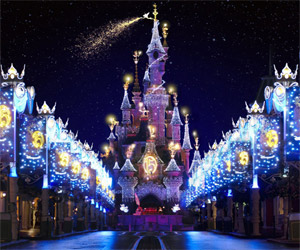