Metro is the most convenient and cheapest way to get from a place to another downtown Paris. Paris metro (subway) is the densest in the world with about 300 stations concentrated in a rather small area. Stations are indeed very close to each other. There are 14 lines numbered 1 to 14 each of them beeing identified by a colour and a name (name of the terminus stations). Please find here below information about Metro (Subway) in Paris: Map, safety, tickets, tips...

Plan your route before coming to Paris. Look at the subway map to get acquainted with the city.
See: Paris metro map

Taking the metro in Paris: Tips and informations

Taking the metro is quite easy in Paris. The first thing visitors should do upon arrival is to get a free metro map at the hotel or in any subway station (You can also print the one above). The only two things to know for an easy ride are the line number and the direction.

Where to buy tickets: Tickets can be purchased at the vending machines (Many different languages available) or at the ticket office at the entrance of every station.
Tickets price: The current single ticket price (June 2011) is 1.70 Euros. Price for a book of ten tickets is 12 Euros (1,20 Euros each). Unlimited Pass for one day is 9.30 Euros (15.20 for 2 days, 20.70 Euros for 3...).
Tips: Visitors should keep their ticket handy as ticket controllers may check its validity any time.
Timetables - Opening hours: Service is operated between 5.30am and 0.30am (Except on Fridays and Saturdays 1.30am).

Difference between Metro and RER

What is the difference between Metro and RER? The Metro just serves central Paris. The RER is a commuter rail network. The RER trains travel faster than the Metro bus there are fewer stops, which are further apart. A specific ticket should be used for the RER (No flat rate - Price change with destination).

Is the metro safe in Paris? Yes the metro is considered as quite safe by most parisians or tourists. However visitors should be particularly vigilant of pickpockets as many operate here. Pick pockets usually work in small groups. When one or two of them try to distract attention another one is picking pockets. In any case travellers shouldn't leave their belongings unattended and try to minimize access to their pockets or purses.

Public transport strikes are fairly common in Paris. It indeed happens nearly every month: Subway traffic is affected by a protest of train drivers. It may only hit a specific line of the all Metro network. It may last just a couple of hours or a few weeks (One month in November 1995)...
Read more: Public transport strike in Paris

Here is our selection of useful resources: 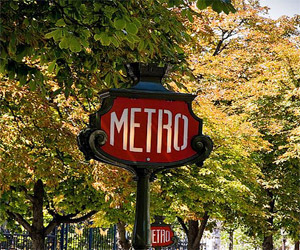