This is by far the most important in Paris: With 200 millions travellers a year it is also the busiest train station in Europe and the third in the world. The gare du Nord station welcomes trains from northern France (Mainly Lille) but also Eurostar and Thalys from United Kingdom (London), Belgium (Brussels) and Netherlands (Amsterdam).
Read more: Gare du Nord train station

The Gare de Lyon is served by trains to or from eastern (Dijon, Geneva) and southern France (Lyon, Marseille, Nice, Cannes, Montpellier...). Not to be missed, nestled inside the main hall of the train station the famous restaurant Le Train Bleu where clients can enjoy excellent food  and admire 19th Century wall paintings.
Read more: Gare de Lyon train station

Paris Montparnasse is another major railway station in Paris. It is a large and modern building (rebuilt completely in 1969) located at the foot of the Montparnasse Tower. It is served by trains from or to cities in the south-west and west of France (Bordeaux, Nantes, Rennes, ...).
Read more: Paris Montparnasse train station

The Gare Saint-Lazare is the second busiest train station in Paris after Gare du Nord. It is mainly served by suburban trains and trains from or to region of Normandy. The place was made famous by Claude Monet who made 11 paintings of the Gare Saint Lazare.
Read more: Gare Saint Lazare

Austerlitz train station is located on the left bank of the Seine a stone throw from the Gare de Lyon (on the right bank). It handles trains from or to South West of France (Toulouse, Perpignan) and Spain (Barcelona, Madrid). It is also the terminus of the Orleans - Paris line.
Read more: Austerlitz train station

Bercy is the smallest of Paris train stations. It is located on the right bank of the Seine at walking distance (1km) from Gare de Lyon. It is mostly served by auto trains (transporting vehicles) and overnight trains to or from Italy (Rome, Milan, Venice) and Spain (Barcelona).
Read more: Bercy train station 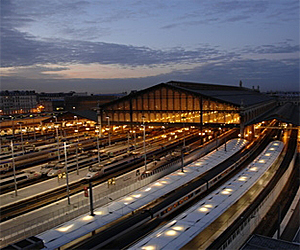