Le Paradis Latin is today one of the mythical and historic cabarets in Paris. It is located in a quiet street of the Latin Quarter a stone's throw from Notre Dame de Paris Cathedral. The main hall with its metal architecture - It was restored by Gustave Eiffel - can accommodate up to 700 guests every night. Please read here below our review of the show and find as well tips and informations about reservation and tickets price, ...

Planning to see the Paradis Latin show?
Book your tickets online in advance with viator!
See: Get tickets for the show

A bit of history

The Paradis Latin was first built in 1803. By this time it was a theater called the Theater Latin. The place became one of the highlights of Paris night life. A few decades, in 1870, later the place was totally ravaged by fire. The restoration began in 1887 and the architect in charge was... Gustave Eiffel. The new Paradis Latin opened its doors in 1889 and the success was immediate. However a few years later Montmartre became the trendy district of Paris nightlife: The Paradis Latin lost most of its clients and the cabaret had to close its doors. It was only in the early 70s, 40 years after it was closed, that the Paradis Latin cabaret came back to life..

Our review of the show

The Paradis Latin show named "Paradis à la Folie" is made of 13 different skits. The highlights of the show are the Enchanted Carrousel and the famous French Cancan dance not to forget the aerial attraction, which is a tradition of the cabaret. Our tip: The Paradis Latin is a popular cabaret in Paris that offers good value for money - It is wise to book in advance to make sure to get a table...

Address: 28, rue du Cardinal Lemoine - 75005 Paris. Telephone: 01 43 25 28 28
Opening hours: 2 shows everyday: For the first show at 8pm dinner is included. The second show starts at 9.30pm (No dinner - Just drinks)..
Tickets price: Prices vary from 55 to 179 euros per person depending on the inclusion of the dinner and the choice of the menu. Some local tour operators provide very interesting packages - See "Tickets"..

Here is our selection of useful resources about Paradis Latin cabaret 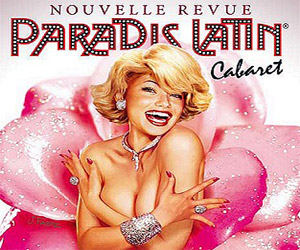